President Bush finally recognized the rising income inequality of the US in his "State of the Economy" speech today. From the NY Times article on the speech:

''The fact is that income inequality is real. It has been rising for more than
25 years,'' the president said. ''The earnings gap is now twice as wide as it
was in 1980,'' Bush said, adding that more education and training can lift
peoples' salaries.

He also cited concerns about CEO pay that have been making headlines for a while now:

''Government should not decide the compensation for America's corporate
executives,'' he said. ''But the salaries and bonuses of CEOs should be based on
their success at improving their companies and bringing value to their
shareholders.''

The skyrocketing increases in CEO compensation have become a focal point of economic research in past years, with many different explanations posited and many different thoughts on how good (or bad) it is. I can't summarize all of the research (both because I don't have the time and because I don't know it well enough), but I'll point you to Carola Frydman, an assistant professor at Sloan, who has been looking at the CEO compensation over a nearly 70-year period, rather than just focusing on the past few years.

The graph below is taken from the New York Times, and comes from a joint paper (with Raven Saks): (click for a better look) 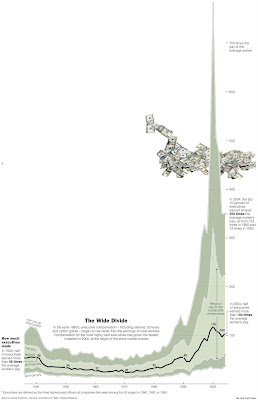 It's interesting that this discrepency did not get worse than it was in the pre-WWII era until the mid-90s, but has really exploded in recent years. And, of course, it's not just the level of executive compensations that's exploded, but the variance, as the most-highly paid executives now have salaries that are out of whack from anything we've seen before. If you're interested, I'd start with the Frydman (and Saks) articles, and go from there....

According to me CEO pays are not determined by performance alone, unless the performance is absolutely worthless. It seems a CEO is paid just for staying around with the company. The CEO pay should be based more on EPS, market-share and ROIC which these chiefs have considerable influence on.