How Much Does Your Birthday Matter?

Freakonomics addressed this question recently, focusing on the birthdates of elite soccer players. The hypothesis is that children whose birthdays cause them to be old in their playing cohort will be more developed and therefore the better players in their cohort. As a result, they receive extra training, attention, and coaching, and are therefore more likely to develop into elite professional players. (Baseball and hockey were taken on by others in response to Levitt and Dubner.)

So maybe being born "old" makes you more likely to be a star athlete. But does it make you more likely to be a Congressman (or Congresswoman)? For some reason, the Washington Post's reports of congressional votes can be sorted by zodiac sign, and it has been pointed out that there are 55 Cancers in Congress and only 24 Tauri. The Agitator raises the question of how likely it is to see this (here and here), if birthdays were random, and the answer is "not very." Here's one commentator's take on why we do see this:

..because of the cut-off levels for schools, Cancers enter a grade at an older age then a Taurus would. Thus, they have experiences more likely to influence someone into politics. These include better performance in sports, better grades, more socially out going, etc. then those in their peer group. 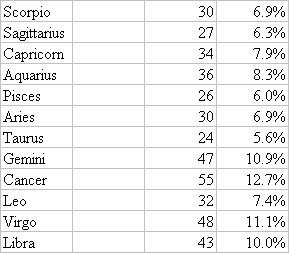 Now, school cut-off dates vary from locale to locale (just as soccer-age cut-off dates vary from country to country), but it does seem that a disproportionate number of congressmen and women were born between May 22 and October 23 (the Gemini to Libra range). However, I think most cut-off dates are in the fall (September or October- I think my school was Jan 1, because my early Feb. birthday made me old in school). So, rather than members of Congress being older in school, they would tend to have been younger in school. That is, unless cut-off dates used to be in the spring, say 40 or 50 years ago when the average member of Congress would have been in elementary school.

So that's probably not the story here. Some other thoughts?

Perhaps you can also consider the Chinese zodiac.

The distribution by Chinese zodiac sign is availalbe here:

Why is being older seen only as an advantage? Perhaps being younger forces kids to develop skills of persuasion and manipulation that are useful in politics.

I wonder if Andy has something there. I can easily understand that being older leads to advantages in sports training, but it's less obvious to me that it would hold in school.

But Bryce's link above (http://ec970socialecon.blogspot.com/2006/07/hey-congressman-whats-your-sign.html) cited a paper that finds that childer that are older in their school cohort do do better in school. So, who knows? It may well just be random chance. As Bryce notes, the thing to do is to see if this is a standard outcome over time in Congress (across countries too?). It may well just be that it's a random event.

Could it be that "old" people excel at sports, while "young" ones, at politics?

Maybe it's because Sagitarrians are born closer to the black hole at the center of the galaxy, which provides enough trauma to cause them to avoid professions that suck.

I think it is random - just like tossing a die. When we accumulate 1 million congressmen, the distribution among different zodiac signs will be uniform.

The total number in the table is 432 and we divide it into 12 groups. Is the statistics in such a setting meaningful?